With thanks to Kathryn Tomasek for the reminder that “we are whole people“, my Day of DH didn’t stop when I left work.

Today, my husband and son met me outside my office, and we headed to the main Berkeley library where I used my access privileges track down and check out six dictionaries for my husband (various combinations of English, Greek, Romanian, Romani, and dialectal Serbian). He’s doing some research assistant work for an emeritus professor on the side while doing a career transition from humanities PhD to medicine, but his pre-med night classes at Berkeley Extension don’t give him library access. 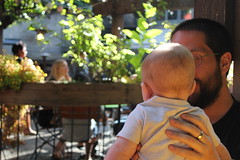 Since it was a gorgeous, sunny day, we strolled from there to Jupiter, our favorite neighborhood brewpub just off campus, to enjoy a pint on the patio and figure out summer travel plans. I kept an eye on my email, and replied to a few active threads from my phone. I’m not looking forward to having to explain my off-work email interruptions to my son when he gets older, and I’ll probably have to to set some clearer boundaries on it, but at 4 1/2 months old, as long as there’s a bottle and strangers to watch and smile at, he doesn’t mind in the least.

By the time we got home, it was almost bedtime for the baby– a rather protracted affair this evening. Once it was done, I took care of a couple more emails, finished uploading the daily baby photos to Flickr (the grandparents will be logging on early from the East Coast to see), and decided to go to bed early, while my husband was hard at work rearranging the living room, culling books from our former lives as Slavists and people with a lot of time to read paper books, to make room for a standing desk and colorful toys that squeak and crinkle.

And that concluded my Day of DH.

Today was the first meeting of the 20-some person Research IT team since last October, covering the major projects, budget proposals, and activities that have developed between then and now. Somewhat unusually, we’re the primary group that provides central support for digital humanities, but we report up through the CIO, rather than being affiliated with the library.

The meeting covered a wide range of topics, from the current budget process to a new set of research computing (including high-performance computing) services, our ongoing strategic planning process, deployments and sustainability for CollectionSpace, and digital humanities.

Since digital humanities was one of the later items on the agenda, I didn’t attempt to restrain my legendary tendency to speak far too quickly, in order to get through everything in seven minutes. I covered DiRT, the hackathon, the new Digital Humanities @ Berkeley site, and our work around building a digital humanities community on campus through sponsoring DHSI, and encouraging people to participate in Day of DH (which led to a meta-moment as our DH Assistant, Cindy, tweeted about me presenting on Day of DH). I managed to finish with 60 seconds to spare.

The to-do list continues to prod me about unwritten emails (“email Geohumanities folks re: DiRT”), unfixed bugs (“deal with nid 1069 and related problems”), vague attempts at progress on large projects (I literally have a recurring item for “write something for Drupal for Humanists”), and concrete tasks (“write blurb for DH on RIT website”). I’m choosing to ignore all of it, though, and instead think about some of the bigger-picture issues facing some of my large projects.

A specific, technical discussion about APIs on Friday got me thinking about where the DiRT directory falls on the scale of sites that are socially-oriented (users with profiles, keeping track of contributions, etc.) vs. those that are information-oriented. Information-oriented sites still need people, but there’s a different staffing and incentive model. It’d be great if everyone who looked up tool information on DiRT were also a contributor, but that doesn’t seem to be happening. Instead, DiRT (as I’ve run it) has grown when an individual with a particular interest in certain kinds of tools shares that information. DiRT grows when someone goes on an editing spree, rather than through everyone contributing something on occasion. There are people who I know are long-term DiRT users who have never even created an account. There’s nothing wrong with that, but the time has come when we need to better think through the model of who we’re trying to engage, and how.

I’m lucky to have a wonderful and dedicated group of people on the DiRT board to help figure out these issues. We’ve got a number of sub-committees looking in depth at various aspects of DiRT, which should lead to some new developments over the summer. I just wish I had a little more time to step back and just think. The way I have my workflow set up, it’s so much easier to jump from doing one thing and then another. “Think!” is even less suitable as a to-do list item than “write something”. Perhaps the drive up to DHSI in June will be productive in that respect, though.

Meanwhile, new things have been set in motion this week on another project, DHCommons, as we announced the call for project statements from mid-stage digital projects. It was almost a year ago that we first brainstormed our way to the model of the project statement as a way of doing peer review for digital projects, and I’m very curious to see to what extent it works out the way we intended. The position of “technical editor” is a great one. I’m fascinated by experiments in scholarly communication like the one we’re undertaking here, and I enjoy being able to shape what the project is doing, but I’m not sure if I’d want to be personally on the hook for controversies that might arise with a new journal. Not that it’s a position immune from receiving angry email, but given the choice, I’d rather be on the hook for a buggy system (which frustrates people, but rarely infuriates them) than editorial choices as such.

My phone’s notification light reminds me that I have a meeting in five minutes. Emails are piling up again in my inbox– this time, it’s a hungry hackathon participant wondering if we’ll be providing food during the judging on Saturday. (We will, but we didn’t publicize it at first because we weren’t sure if the funding would come through.) No more time for thinking today, it’s back to doing.

This morning, the first task at hand was assigning an API key to a newly-formed team for our #HackFSM (Free Speech Movement archive) hackathon. Even though we’re already eight days into our 12-day event, a group of students still wanted to participate. Figuring they could use every hour they can get at this point, I took care of that first.

Next up: email and to-do list triage. I need to send out an agenda for this Thursday’s Digital Humanities Council meeting, but first I need to find out what the Dean would like on said agenda. I need to write the weekly round-up of what DH work has been accomplished before the meeting with my boss at 11. The monthly round of Drupal code updates, now for no fewer than 10 sites, can be postponed until a good multitasking opportunity. There are emails that hit my inbox just before my son was born in November; some of them still need replies, as my to-do list reminds me. Feeling guilty, I change the due date for the umpteenth time.

Most days are filled with minutiae like this, and sometimes it feels like an endless email/to-do list treadmill, particularly when I don’t carve out time to make progress on my bigger projects (like writing something for Drupal for Humanists). But every so often I’m reminded of how far digital humanities at Berkeley has come in the last 18 months. All those emails, the reminders to check in with faculty on their projects, the conversations about technical approaches, the calendar-wrangling required to get the right people in a room together, the Drupal updates so our sites don’t get hacked– if my student assistants and I don’t just go do these things, they won’t happen. One email, one conversation, one event at a time, the work we do adds up to a more cohesive DH community here at Berkeley, and a better-coordinated plan for how to move forward together.

I may not be doing DH, but I’m making it happen here, and that’s exciting. 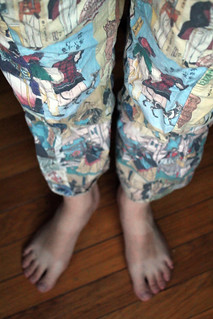 One of the small pleasures of moving from Chicago to California has been the greater freedom to wear whatever I like, within reason, to the office. My office-mates are almost all central IT folks, representing a fairly typical range of personal styles, though there’s fewer programmers in jeans and t-shirts than you might expect. Plenty of jeans and polo shirts, lots of slacks and button-down shirts, and women in various flavors of “business casual”. Even so, I get remarkably few funny looks for showing up in my homemade “digital humanities wear”– pants, skirts, and tops in DH- or Slavic-geeky fabrics I’ve designed and printed on Spoonflower.

The number and nature of the meetings I have on a particular day have some influence over what I pick out in the morning, though the biggest factors are laundry status (is it clean?) and location (can I dig it out without waking my husband and/or son?). Today’s winners are a pair of pants I made for a talk at the California Society of Archivists conference last year (using Japanese woodblock prints of westerners, acquired using the fabulous Japanese woodblock print search), and a top that uses a Russian-themed Japanese fabric that subs out “W” for the Cyrillic letter “ш”.

A decision about clothes is hardly a weighty one, but being able to wear something geeky to the office does brighten my day a little. What’s more, Slavic-inflected clothes are some of the only daily reminders of my past life as a Slavist, now that I’ve been “alt-ac” for twice as long as I ever was “ac”.