… I have a few reflections. Taking in everything I’ve blogged about today–playing with the CD-ROM digital facsimile of the Codex Amiatinus, web design for digital projects, geospatial mapping, and APIs–one theme that emerges is the pursuit and presentation of knowledge. My Day of DH was also punctuated by some of the things I tweeted about, including reading others’ Day-of-DH-related posts (by Tom Scheinfeldt here and Elijah Meeks here), checking out others’ projects (like the Medieval Disability Glossary), working behind the scenes with my Judith Omeka archive (thanks to Anna Kijas!), as well as exploring the possibilities of Wget to mass download manuscript data from e-codices. For me, today was much more about exploring and playing than it was about any specific “product” besides learning. I realize, of course, that exploration and play are great aspects of (digital) research, and the foundations of innovative (digital) humanities work. I put “digital” in parentheses because I think these notions apply to research more broadly, too. I like that not everyone’s Day of DH is all digital–mine happened to be a lot of digital work (though not all), and that was great. But I think that the thread of the pursuit and presentation of knowledge throughout my posts is indicative of humanistic inquiry generally. I had the opportunity to spend the day in a setting with others enthusiastic about research (of many types, digital and otherwise), and I took it. While I had no specific aims or goals, I’m happy with the outcomes.

This afternoon I learned about APIs (application programming interfaces). For real. Before, I’ve read about them, read around them, seen many references to them–but never quite got what they are or how they work. So we asked one of the UConn library web developers to give us an introduction. One helpful introduction is Europeana.eu’s discussion of APIs, which we looked at a little bit. Then we got some data (from Europeana), loaded it into Open Refine, and played with it.

For over an hour, a group of us has been discussing geospatial mapping, with special interests in open source software for research and pedagogy. It’s been a great, productive conversation and sharing session. Hopefully this is the start to much more collaborative opportunities!

Anyone interested in playing more with maps, feel free to drop by the University of Connecticut MAGIC library. Also, for the UConn community, Kate Johnson is happy to work with people, so email her katharine.johnson [at] uconn.edu.

Some links follow! (Many of these links I’ve compiled over the past year as examples of things I’m interested in, some older, some newer.)

My mapping for the Judith project

One of my favorites: DMMmaps

Some software listed at The Institute for Mapping Technology

Railroads and the Making of Modern America

A Literary Map of Manhattan

One of the things that excites me about gatherings at the UConn Library (like the Day of DH event at the Scholars’ Collaborative) is the collaborative energy. I’m sitting here discussing web design with a graduate student colleague in English and a web developer for the libraries, working on how to display archival poetry online. The question from us grad students is how to show variant textuality and material archival documents online, visually, and effectively. The answer from the web developer is an innovative API on top of a database of the textual artifacts. The result is collaborative magic. The conversation is dynamic, fruitful, and helpful for thinking outside of what we’re all used to. 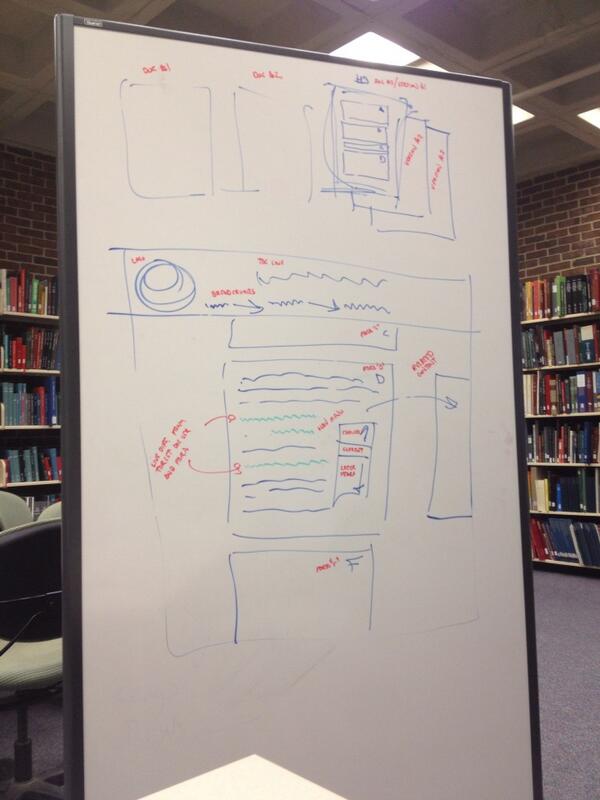 For the last few days, and this morning, I’ve been pursuing a puzzle that has to do with the apocryphal Psalm 151 in the Codex Amiatinus (part of revising a talk I gave on this apocryphon in Anglo-Saxon England). Amiatinus is one of the most–many would say the most–important witnesses for the early text and circulation of Jerome’s translation of the Bible into Latin, what would become known as the Vulgate. It is also a major artifact for early Anglo-Saxon culture.

Mostly, I wanted to examine digital images of Amiatinus, which are available on a CD-ROM facsimile, produced in 2000. Unfortunately, this presented some frustrations: the program is based on Windows 95/98 technology for PC, and Mac OS 8.5. Digging a bit deeper into the file system of the CD-ROM, I found the right “images” folder with a hoard of jpgs–only to find that they’re not high resolution, and are not readily usable for zooming or detailed viewing. For example, the page I wanted to examine (folio 418r) looks like this (I’ve also included the file information beside it):

And that’s about the best display without losing quality from zooming in.

My first reaction to all of this was surprise and frustration at the fact that I couldn’t find the Codex Amiatinus online. Since it’s recognized as a major medieval cultural artifact, and a significant manuscript in many respects, why wouldn’t a digital facsimile be available online? (I know that there are, of course many possible reasons for this–finances, politics, etc.) My second reaction was dismay at the data that is available–and slowly becoming obsolete. A lot of this reminds me of Will Noel’s continual outcries for libraries to free their data. Of course, the data I wanted was available, it just wasn’t adequate. That’s also part of Noel’s notions that “data should S. U. C. K. It should be sustainable, it should be usable, it should be complete, and it should be known–that is, it should be out there.” So I’ve been pondering this a bit. And I’ve been hoping that more libraries will heed the call of many cultural historians to put out more data will “S. U. C. K.”

My morning almost always starts by catching up with the world: news, social media feeds, etc.–accompanied always by coffee, almost always a cat in my lap, and often music. Today’s Day of DH is no different so far. Here’s this morning’s musical selection:

Day of DH 2014 is, of course, tomorrow, so just a quick post about what I’ll be doing. Generally, I’ll be attending a small-scale, local Day of DH at the University of Connecticut. I’m looking forward to workshops, open hack sessions, and an end-of-day keynote talk by Alenda Chang (Professor of English at UConn) on “Greening Games.”

More specific to my own work, I’m hoping to focus a bit on the Omeka archive for my Judith project, muddling with some details and hacking the interface and layout. Otherwise, I’ll also probably be puzzling through some issues with my current obsession within the Judith project: a digital edition of Hrabanus Maurus’ Commentarius in Iudith (which I discuss more over on the project blog).

Welcome to Day of DH 2014. This is your first post. Edit or delete it, then start blogging!